Mo’s Green Audi A5 from Atlanta, USA with SR66 wide body kit – behind the scenes! 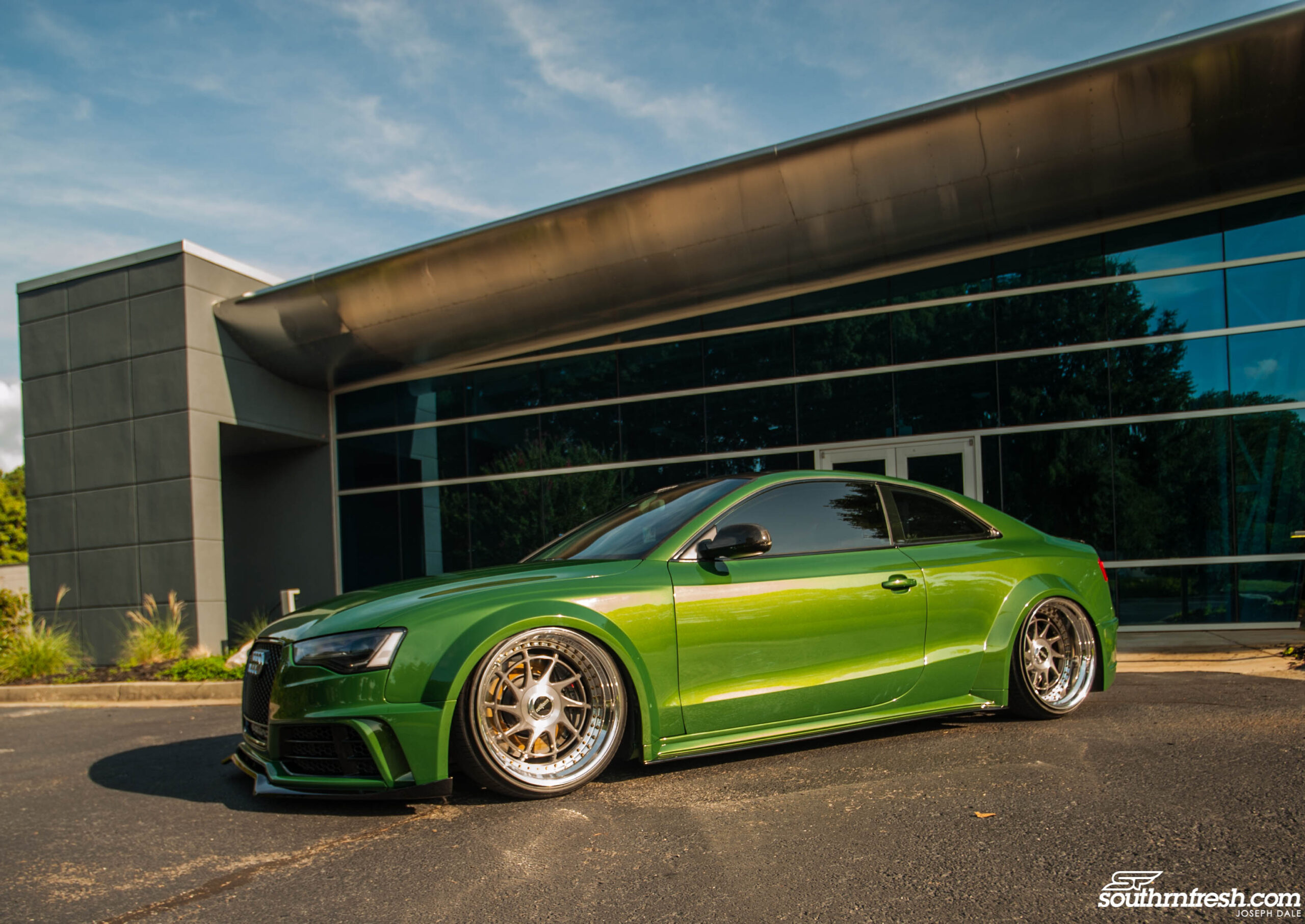 We recently shared with some pictures and even a short clip of the green widebody Audi A5 that was assembled in Atlanta, USA. Today I’ve got a bigger post for you! I strongly believe, that a satisfied customer is the best form of advertisement! Below you’ll find few words from our customer, Mauricio – known on Instagram as infamous_m0.

Hello! With whom I have the pleasure to talk & what’s your story?

Hi. I’m Mauricio, and I’m the owner of the green SR66 Audi A5. So a back story, I’ve been modifying cars for over 15 years. I started back in 2004 with my Nissan 240sx, which was mildly modified: suspension, wheels, aftermarket lights, exhaust, sound, you know, the basics. Later got rid of that and got a 97 Honda prelude, then moved onto an Infiniti G35. So, you can say I was a JDM guy before.

Fast forward to 2014, that’s when I decided to purchase my 2011 Audi A5. People ask, why an A5? Easy, because it was my daily commuter at that point. Needed something with great gas mileage, looks and luxury. After hearing about issues on the V8 S5, and the new facelift S5 being out of budget, I opted for an A5 Prestige 2.0T in Black with Black Optics. Immediately I started modifying it.

Got air suspension, and wheel within the first 2 months of ownership (I couldn’t leave it stock). From 2014-2018 I swapped wheels again, got bigger brakes, ABT Front Bumper, Rieger Side Skirts and diffuser, wrapped the car twice, go my trunk setup completed, so you could say I couldn’t stop. Then 2018 came along, and I needed to make a decision; either continue building the car or sell it and start over with something else (Porsche Cayman 981 or Porsche 911 – 997).

So you were at crossroads. What happened?

Around October, I found an ad for the SR66 group buy, and I knew then that I had to have it. In 2017 I saw the first kit roaming through the internet and always loved it, just didn’t have a way to get it. Dealing with European companies while being in the US can be challenging at times, so scrapped the idea until Chris, the US representative, was able to get me the kit. So placed my order in October of 2018. Kit arrived at my friend’s body shop in May of 2019, and we immediately went to work. Started with cutting the rear panels, and putting the kit together.

What were your thoughts regarding our wide body kit?

Got to say, the quality was worth the wait! Everything went into place without a lot of modification. After everything was installed then came paint, which was a difficult task by itself. Saw a couple of renders of the kit in different colors, and then decided to paint the car in Porsche’s Chalk grey. The body shop did another BMW in the same color, and if you know me, you know I hate having popular colors, soo had to change it.

After seeing the B9 RS5 in Sonoma green, I always loved the color, pretty bold for Audi. I opted for this green because it was a nice color. Bold in the dark, but party in the sun (Gold pearl shines when the sun hits it). The shop was like huh? You sure? I just said, trust the process. So paint got sprayed and car was later put together. Let’s just say everyone became a fan. I’m extremely happy that this whole transformation happened.

What are your future plans for this project?

Now to continue with the interior, because we all know, we’re never done!

If you would like to say few words to people that helped you with this build – this is the time & place!

Shoutout to my wife, TS1 Auto Works in Tucker, GA for the install and paint, Dropgearz Motorsports and Overlit Customs for the Headlight work, Luis @ Concept One for the first Set of Klutch wheels, Jeremy and the crew at Bremen Autowerks, and my Infamous Society Car club family, Jordan, Dre and Tega. We kept the secret for a while, until the car came out. The shock was great!

Also Shoutout to Chris and Michal, you guys have a great kit, keep it going!